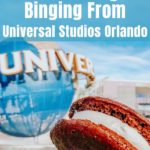 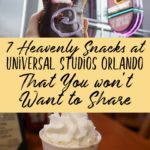 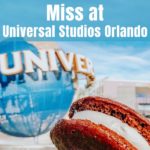 Picture it. 1999. Walking into the gates at Universal Studios Orlando. You run to the Back to the Future ride then hit up E.T. before the afternoon crowds rush in. Now it’s lunchtime and you have no idea what to eat. Back then, the best snacks you could find were funnel cakes and french fries, so you settle for that. But hey, at least you had 80s nostalgia movie rides and Fievel Goes West playground! Flash forward 11 years and the Wizarding World of Harry Potter has its grand opening. Harry Potter fans can now experience what it’s like to go to a real-life Hogwarts and they cry tears of joy into their real-life Butterbeer.

With the opening of Harry Potter land, Universal introduced a slew of incredible entertainment and attractions for grown-up Wizards everywhere. Don’t believe me? Check out this article including 12 Awesome Things to Do for Adults at Universal Studios. The real miracle is they totally overturned their reputation for mediocre food. Some snacks are decadent, some are savory, and some are literally on fire. And now that we have all these options, we still have no idea where to go because there’s too many of them! What a delicious problem we have on our hands! As a fan of Harry Potter treats and Simpsons branded Duff Beer, I’ve done a lot of “research” on Universal food so I’m here to help narrow down your choices. The snacks I’ve highlighted are either crowd-favorites or underrated treats that deserve more love than they get. Your insider guide to heavenly Universal snacks is here for you!

P.S. After we’re done daydreaming about Sticky Pudding I’ve got a FREE gift for you that will help you save on your next vacation! You can learn more about it at the end of this post!

Any milkshake from Toothsome is totally worth it, but the Red Velvet Milkshake has rocked the world of many. This vanilla milkshake is drizzled with raspberry sauce and topped with whipped cream, sprinkles, and a huge red velvet cupcake. The Brookie Sundae is also super good and an upgraded version of the classic snack that was once available at the Beverly Hills Boulangerie. Now that the Boulangerie is closed, Toothsome is the only place you can get the Brookie. This sundae comes with a cookie baked inside a brownie then piled high with ice cream and chocolate toppings.

Best part? Toothsome is located inside Universal CityWalk which has free entry. You don’t have to buy a ticket into Universal to enjoy these decadent masterpieces! Even better, CityWalk parking is free after 6:00 PM. It’s also free if you arrive between 11:00 AM-6:00 PM and buy two matinee movie tickets from Universal Cinemark. Movies and dessert? Yes, please!

How do you take your Butterbeer? Frozen? Cold? Hot? This is the great debate of Universal Studios enthusiasts worldwide. Butterbeer is a drink inspired by the beverage from the Harry Potter books. At Universal, it’s a non-alcoholic mix of cream soda and butterscotch. And it’s super yummy. I may be overstepping my bounds, but I believe the frozen option is the best way to order your Butterbeer for most times of the year. When it’s hot, crowded, and muggy the only the thing to satisfy your thirst is a cold and blended Butterbeer. The cold option is also good, but I find that it warms up too quickly when you’re puttering around Hogsmeade. And the hot version? Maybe if you get there early in the morning or visit during the month and a half that Florida has cooler weather. Otherwise, you’re better off recreating the hot version at home. It’s a super cozy treat during the holiday season.

This is the only savory snack on my list because it’s completely underrated and not mentioned on most snack lists. It’s featured on the appetizer list at the sit-down restaurant Finnegan’s and it’s totally worth stopping in for. You get a huge pile of fried onion strings and sliced potatoes served with malt vinegar.  It’s a hefty, tangled brick of fried greatness. You can easily share this with one or two people. Finnegan’s also features coffee cocktails like Bailey’s n Coffee. It’s a great place to stop in for a pint and a break!

The Big Pink donut from Lard Lads is a novelty doughnut solely created so you can #doitforthegram and post a picture of it on the internet. It really is just a big pink doughnut and there’s nothing too special about it. Don’t get me wrong. I love a beautiful piece of food that’s been created only to provide divine beauty and be shared among your friends on Instagram. But if you’re actually going to enjoy The Big Pink then do it right with the D’oh-Nut Sundae. The sundae comes with the Big Pink Donut topped with ice cream, whipped cream, a cherry, and your choice of topping. It takes your giant doughnut and upgrades it about 3 times.

This is where you will find the best doughnut at Universal and dare I say, any theme park property. These doughnuts outshine The Big Pink in terms of taste, quality, and design. I’ve been going to the Voodoo Doughnuts in Portland since I was a kid so by the time it came around to Universal, I was an expert doughnut connoisseur. My personal favorite is The Triple Chocolate made with chocolate cake, chocolate frosting, and topped with cocoa pebbles. But if you want the true Voodoo experience then go for the classic Voodoll Doll. This is a Voodoll shaped cake doughnut topped with chocolate icing and filled with raspberry jam. The doll is pierced with a pretzel stick for extra emphasis on the whole “Voodoo doll” thing. It’s also a little bigger than the other doughnuts at Voodoo so it will be more satisfying!

Over at Studio Sweets, you’ll find a variety of grab-and-go snacks that you can enjoy while you wait in line for Minion Mayhem. Most people go for the Minion Candy Apple because it’s super cute. Although, if we’re going for taste rather than aesthetic there are better choices here. One underrated treat is the giant whoopie pie. It’s a pile of fresh cream sandwiched between either red velvet and chocolate cake. And it’s a big as your hand! I bought one on my first day at the park and snacked on it for the remainder of my trip!

Sticky Toffee Pudding is a traditional English treat that was brought into the Wizarding World of Harry Potter. There are other noteworthy sweets in Harry Potter land, but I wanted to shed some light on this underrated dessert. It’s very similar to bread pudding which is basically a super moist sweet bread/cinnamon roll. The bread is soaked in a toffee sauce and covered with nuts and ice cream. It’s rich enough to share and something you’ll daydream about once your trip is done.

You guys!!! They have sticky toffee pudding at the Harry Potter part of Universal Orlando. I’m 💀 #formerfatkid pic.twitter.com/u0r5OiSaaN

There’s a lot more the Wizarding World of Harry Potter has to offer. In both snack form and entertainment. To make the most of your Universal vacation head over to 12 Things to Do at Universal Studios for Adults. This describes all the best drinks, rides, and insider tips to make your vacation complete!

I’ve also got you that free gift I mentioned before! Whether it’s Disney or Universal, visiting a theme park can be pretty expensive so I put together a checklist that will help you save money on your next vacation. The guide is called 15 Ways to Save on Your Next Disney Vacation. The insider tips can be applied to either a Disney or Universal vacation. Chances are you’ll be visiting the Mouse if you’re heading to Universal anyway! Click here to get your free guide or fill out the form below!

Previous Post: « 14 Vacation Essentials You Must Buy Before Leaving for Your Disney Vacation
Next Post: 5 Legitimate Disney World Discount Ticket & Package Companies (That Won’t Scam You!) »

This site uses Akismet to reduce spam. Learn how your comment data is processed.

I'm Kylee Gano - a former Cast Member and professional Disney Travel Planner. My mission is to provide stress-free vacations for the young-at-heart. If you need the help of a Travel Agent, feel free to reach out! Otherwise, peruse my blog for planning advice, tips, and activities that will add a little whimsy to your next Disney vacation. Read More…

Oh hi! I apologize to those of you who I haven’t

What are the odds that Starbucks AND Disney World

☕️ Coffee Chat with Kylee! I need some opinion

Had the privilege of helping with a Puppy Rescue F